ON LINE SCREENING EVENTS – the way to go?

ON LINE SCREENING EVENTS – the way to go?

ON LINE SCREENINGS – are they the way to go?

It’s proving that way. While it’s sad not to be in the actual real life presence of audiences watching our films and engaging in face to face discussions, we have had considerable success with a number of recent online screenings with many more people being able to attend had the current restrictions not been in place. Small blessings from the disaster that is the Covid pandemic.  And audiences have been international,  made up of professionals, academics and bereaved families again asserting the humble truth that …

The Good Grief Project is a small charity with a big reach.

So in November we were invited by Dr Katherine Shear to present A LOVE THAT NEVER DIES to The Center for Complicated Grief, part of Columbia University in New York and just this month to Heart Song a bereaved parents support group in New Zealand.   Both events were streamed using Zoom and followed by lively discussions – the film brings up so many issues both for those deep in grief and for those who care for them and engaging with people on the other side of the globe is hugely rewarding.

“It just all hit home … I feel like I’ve done all the same things as everyone else – drink too much, sleep with my sons ashes, rage, cry uncontrollably …”

“An exquisite film.. timeless. … full of hope but without dismissing any of the extreme pain associated with child loss.”

Sharing stories across the globe

A common theme is the need to share your story of grief openly as an important way of accommodating the trauma and loss into your life.   All of the contributors to A LOVE THAT NEVER DIES have done this and survived the (perceived) added trauma their honesty might bring up.  So the film and the stories it tells provide a model for those enduring the immense pain that follows the death of a son or daughter, brother or sister, and irrespective of where we are in the world, each screening allows for a bit more comfort and a bit more solace for those who watch it.

And none more so that for two UK based screenings which attracted over 300 viewers to each event.  Immediately following the new lockdown restrictions bereaved parents Deirdre and Liam Nolan joined us on stage at The Sundial Theatre in our local town of Cirencester on what should have been a ‘real’ audience for a screening of A LOVE THAT NEVER DIES but then had to be presented on line only.  Deirdre and Liam’s daughter Laoise died in 2016 aged 9 following 8 years of treatment for leukaemia and the event was organised to raise funds for their chosen charity Children with Cancer UK as well as for The Good Grief Project.

Check out the discussion that followed in response to some really important questions – again the theme about how we learn talk about our dead children was itself a strong talking point.

Thanks to every one who signed up on the night – donations totalled over £2000!! Thanks also to Cirencester College and to Kieron Milsom (manager at the Sundial Theatre) who so generously gave of his time.

The ‘superpower’ of grief

Two weeks later we were in Redbridge, and Kirklees and Newcastle and many other venues across the UK to show A LOVE THAT NEVER DIES from the comfort of our own sofa!  Another very successful on-line event organised by Death Positive Libraries, presented by Gary Andrews, otherwise known as Gary the Scribbler and a significant contribution to the first National Grief Awareness Week (#NGAW20).  Death Positive Libraries is an online film and book club with a difference. It’s a collaboration between a number of libraries and part of a larger research project run by Northumbria University which explores the idea of using libraries as safe and trusted spaces to start supportive conversations about death, dying and loss.  Gary the Scribbler is an artist, animator, the man behind A Doodleaday and author of Finding Joy, an illustrated tribute to his wife Joy who died from sepsis in 2017.

This was a wonderful and truly engaging event with questions flooding in after the film, again many of them centering around how grief has impacted our lives – more than one contributor referred to their grief as a ‘superpower’, something that once you have survived the shock, the pain and the denial you can be whoever you want to be in the sense that the death of a loved one inevitably prompts you to live a fuller life.   Would you agree?

See the recording of the Q & A by clicking on the image below. A last thought – do we have a problem with grieving men?

Of all the wonderful and constructive comments we have had from these screenings, there’s one that stands out for me in particular.  A viewer in the US noted the absence of any reference in A LOVE THAT NEVER DIES to ‘the role of toxic masculinity in the grieving process’ and how this can present a very real ‘roadblock’ to a better grief.  It’s true we haven’t dealt with the way men, fathers and brothers, handle grief or whether their way of doing things is ‘good’ or ‘bad’ when it comes to processing trauma and loss. Toxic or not masculinity as perceived and experienced by both men and women does in my view present a number of considerable challenges to the way we (both as individuals and as a society) understand and talk about grief.  In ten years since Josh died, I have attended many events and gatherings organised by and for bereaved parents.  On average I would say that women outnumber men by around 7 to 1.   Beyond the obvious (men aren’t good with feelings) I’d love to find out more why this is – whether we men as a gender really are a hindrance to a better acceptance of and empathy towards the bereaved in general.   Maybe there’s another film project there – so if you are a bereaved dad or a brother give me a call (or fill out the contact form)

A LOVE THAT NEVER DIES – Organise your own online screening 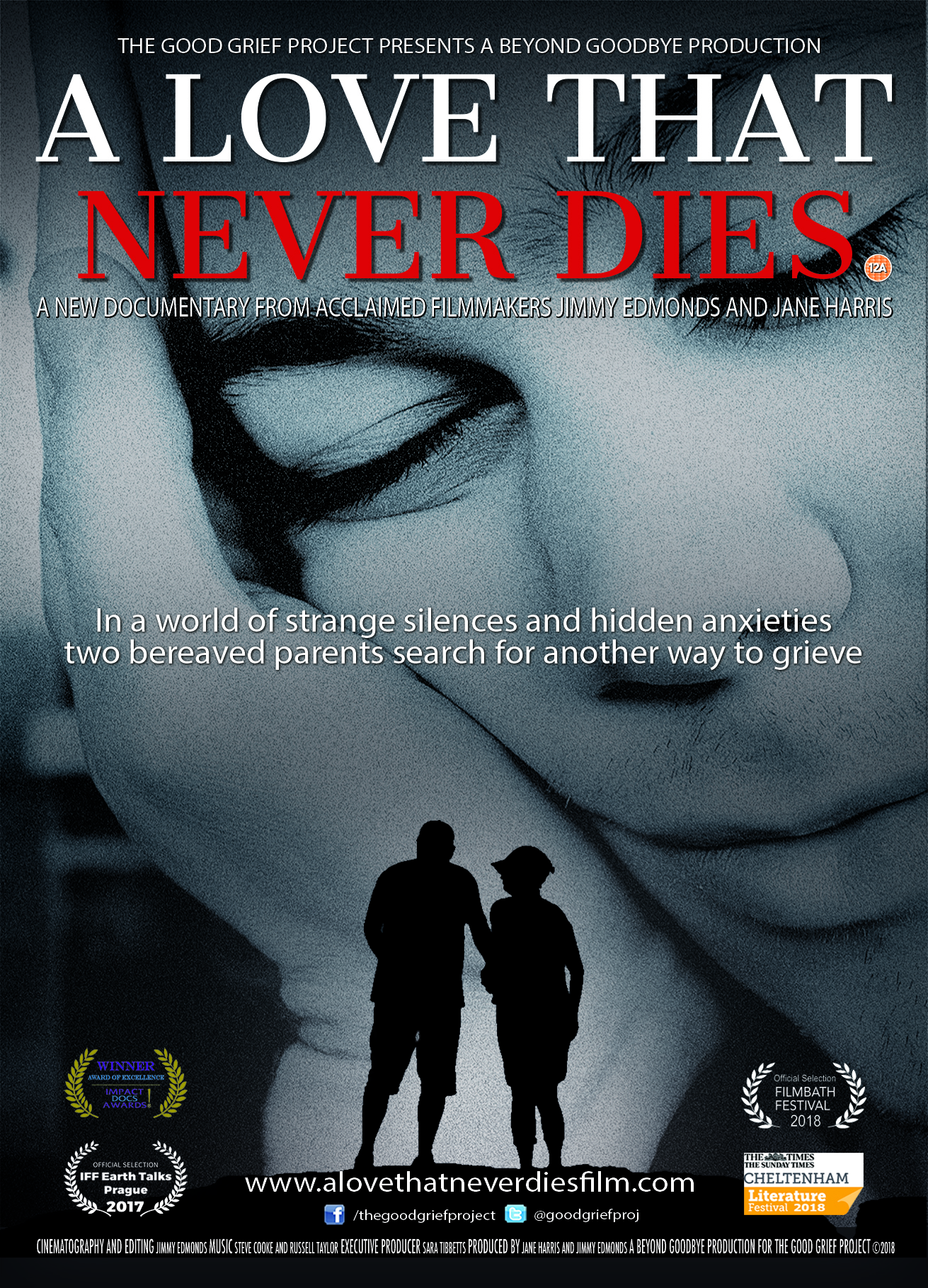 Remember you can organise your own ONLINE screening of A LOVE THAT NEVER DIES – just write to us at info@thegoodgriefproject.co.uk for more details

“An amazing insight into grief.”

“This film was truly remarkable, beautifully  filmed and edited touching subjects which we find hard to talk about.”

“A huge thank you to Jane and Jimmy for their honesty, and for the emotional journey you’ve taken us on.”