Below is an extensive list of the great coverage we’ve received in the media.

If you are a journalist or writer and wish to contact us for an interview or comment, please call 07808 472885 or email info@thegoodgriefproject.co.uk

Our latest film BEYOND THE MASK, is featured on BBC Spotlight.   Jane explains our motivation to make the film and contributor Sangeeta Mahajan talks about the way the film helps people to feel less alone. 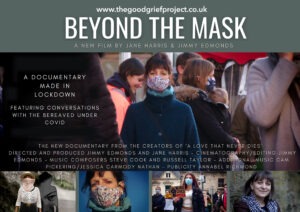 BEYOND THE MASK FILM REVIEW BY Jeremy C. Processing What Matters Most: 5 things that I have learnt since the death of my son, Josh

Our latest film BEYOND THE MASK, is featured on BBC Points West.   Jane explains our motivation to make the film and contributor Deirdre Nolan talks about the value of talking openly about your grief, something the pandemic has enabled her to do. 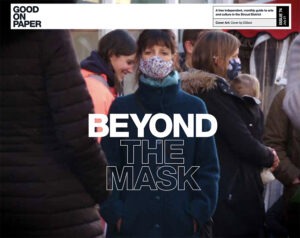 Stepping into another’s grief can be daunting …

Endurance athlete Nikki Owen notes how lockdown and isolation has shone a light on what we as humans go through when faced with extreme loss.   ‘Beyond the Mask’  she writes ‘invites us to re-evaluate what’s important in our lives” 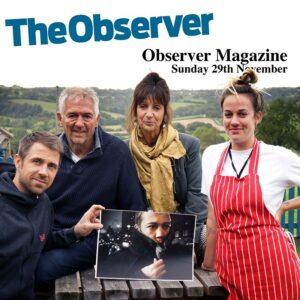 Creative therapy and shared support can help with grief after losing a child.

Sharon Walker whose daughter was stillborn 22 years ago attended our Active Grief Retreat at Manifold Farm in September. This is her article about her experience in The Observer Magazine. 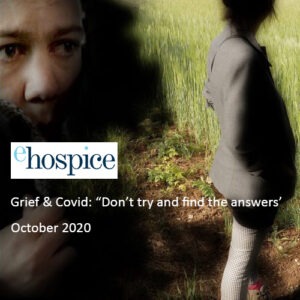 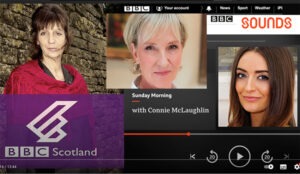 Jane and Julia talking about the Good Grief Festival of Love and Loss (30th October to 1st November). 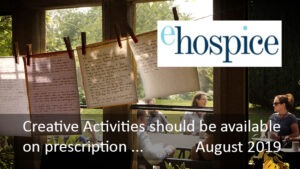 Creative Activities should be available on prescription … 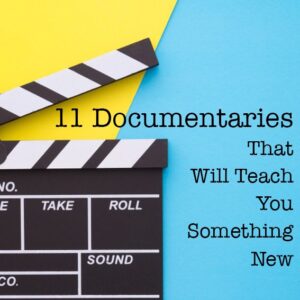 11 Documentaries That Will Teach You Something New.

“We asked members of the Thrive community to share a documentary they recently watched that opened their minds to a new perspective, idea, or passion…A Love that Never Dies.” 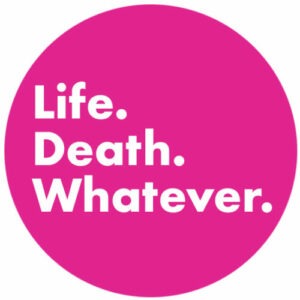 Five Things we want you to know about grieving for a child.

The death of a child is never an easy subject to broach. No matter how long you’ve known the parents it can be difficult to know how to talk to them about their grief.

Jimmy and Jane offer five things they have learnt since their son Joshua died in 2011. 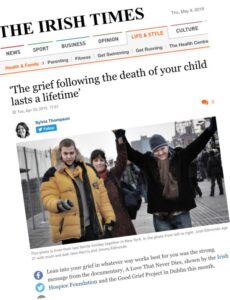 ‘The grief following the death of your child lasts a lifetime’.

Lean into your grief in whatever way works best for you was the strong message from the documentary, A Love That Never Dies, shown by the Irish Hospice Foundation and the Good Grief Project in Dublin this month. 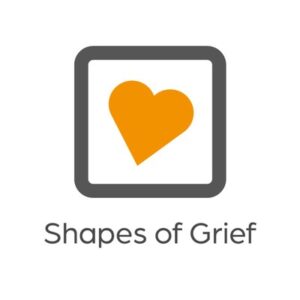 Shapes of Grief is produced by Liz Gleeson, an Irish grief therapist. Liz hosts conversations with ordinary people about their experience of loss and grief in their lives. Through the recounting of our grief stories, healing can begin to happen, both for the teller and the listener. 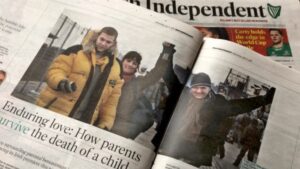 Enduring Love: How parents survive the death of a child.

There shouldn’t be a time frame around healing. You don’t ‘get over it’. The more you love, the more you hurt. You can’t get around sadness – you have to go through it. We’re saying let’s be brave and strong and let’s allow people to be open. Let’s not apply rules. 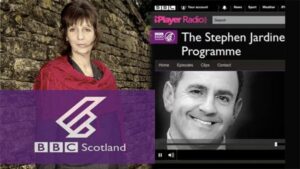 Jane Harris talks to Stephen Jardine about A LOVE THAT NEVER DIES. 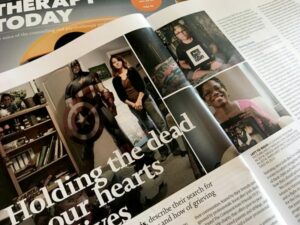 Holding the Dead in our Hearts and Lives.

‘In grief we discover, often surprisingly, that the people we attach to, the people we love most deeply, have affected us in ways that we don’t always realise’. 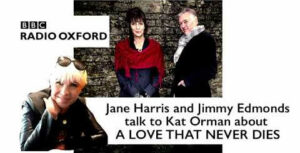 Jane Harris and Jimmy Edmonds talk to Kat Orman about A LOVE THAT NEVER DIES. 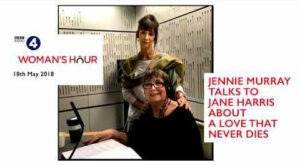 Jane Harris talks about A LOVE THAT NEVER DIES with Jenni Murray. 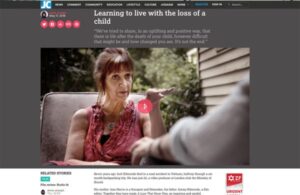 Learning to live with the loss of your child. 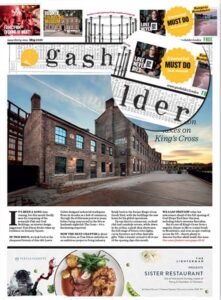 Gasholder (London Belongs to Me network)

A Love That Never Dies: a movie about grief and hope.

‘Expressing their love – and embracing their pain – through creating things has become the process they’ve since let take over their lives.’ 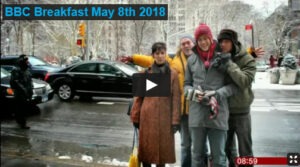 Directors Jimmy Edmonds and Jane Harris talk about A LOVE THAT NEVER DIES with Dan Walker and Louise Minchin. 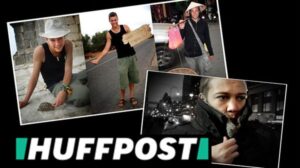 7 things bereaved parents want you to know about grieving for a child.

‘Sometimes, the greatest fear is when everyone stops talking about her or him, as if they never existed.’ 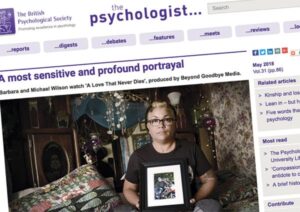 A LOVE THAT NEVER DIES – a most sensitive and profound portrayal. 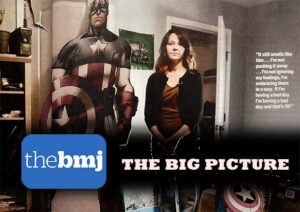 The Big Picture – opening the door on grief.

When Kelly Anglin’s son died aged 14, she was loath to disturb anything in his room and when documentary film makers visited a year later nothing had changed. 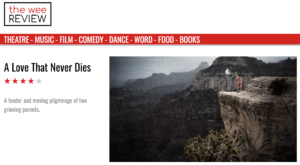 A Love That Never Dies a tender and moving pilgrimage of two grieving parents.

‘There is something shocking and yet therapeutic about this film: it is as straightforward and as honest as it could possibly be. In the realisation that tiptoeing around the truth and pain does not help, the directors make the decision of digging deep into their and other’s grief, with understanding, delicacy, and frankness.’ 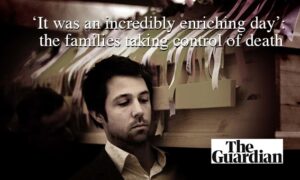 How to take control of death.

We plan for births, but fail to take full charge with deaths. Annalisa Barbieri meets the families who are building coffins, cancelling the hearses and creating highly personalised funeral services – before, sadly, putting her new knowledge to use. 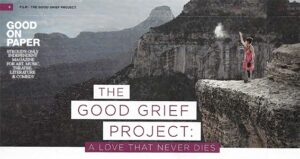 A LOVE THAT NEVER DIES – a review by Judith Gunn

The last time I saw Josh Edmonds, was outside Vue Cinema in Stroud, it was cold and we were going to different films so we chatted in the queue. On March 16th at 7.30pm, Josh will be back at Vue Cinema, only this time in spirit, because Josh died in a road accident in Vietnam six years ago. He was twenty two. He left behind his parents, a brother and sister and many, many friends. A Love That Never Dies is a film inspired by Josh’s life, his death and the trauma of the loss of a child. 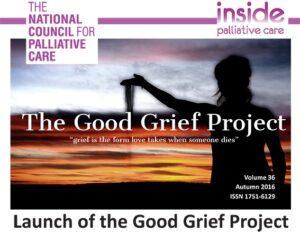 Launch of The Good Grief Project.

The Good Grief Project is a newly formed bereavement charity dedicated to an understanding grief as an active and creative process – we discover how it came about. 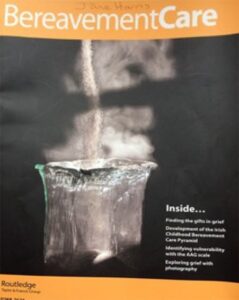 As a ﬁlmmaker and a psychological therapist, Jimmy Edmonds and Jane Harris explore both artistic and therapeutic responses to the grief they now experience. In this article Jane and Jimmy introduce just some of the projects they have been involved with since Josh’s death. 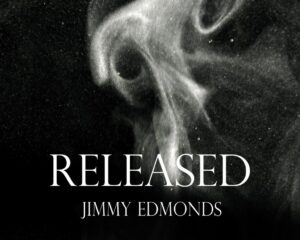 RELEASED - a book by jimmy edmonds.

In early 2011, Jimmy Edmonds’ son was killed in a road accident while traveling in SE Asia. From personal tragedy he has created a moving and insightful book that reflects the way we use photographs in the process of mourning. It is also an exploration of the nature of photography itself. The “chaos of meaning” that Edmonds discovers lying at the heart of photography, mirrors almost exactly his own confusion surrounding the death of his son. Rarely have photography and poetry come together with such force.