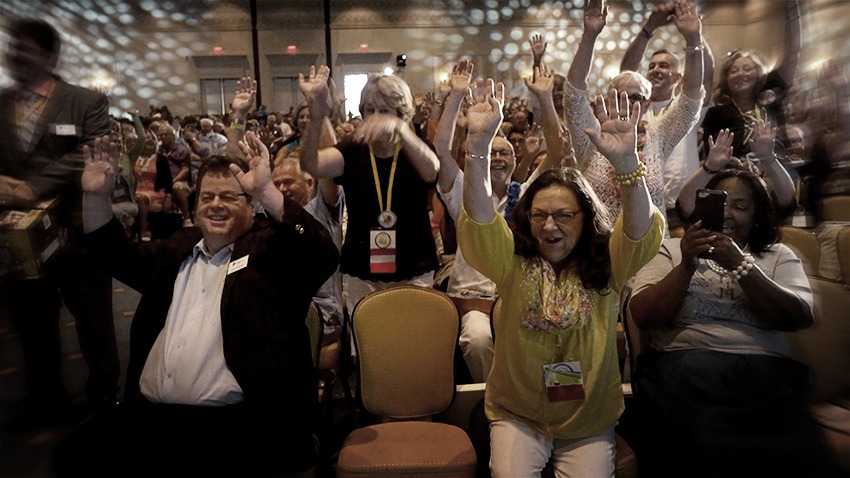 We all have a unique relationship with our loved one so when they die our grief is equally unique.

The way we behave and the way we relate to one another is of course bounded by our culture and by our history. As social beings we will to a certain extent conform to social norms and those norms will differ from culture to culture.

It’s the end of July and we are in Florida – the heat is oppressive but the interior of Hilton Orlando Bonnet Creek hotel and resort is cold and dry. We’ve been invited to screen our documentary A LOVE THAT NEVER DIES at The National Conference of The Compassionate Friends USA. TCF and a number of members of its board had been very helpful as we planned our filming trip to the States two years ago and we are now looking froward to  show them the fruits of our labours.

It’s unfortunate that none of our contributors was able to come. Distances in the USA are large and travel expensive so while sad not to see any of them again, we do understand.

There are, however, 1500 other delegates in attendance – a slightly overwhelming sight as Jane and I gaze down from the podium during our interview with CEO Alan Pedersen at the plenary session. Compared with TCF gatherings in the UK this is massive. It’s a proper conference held in a proper conference venue with over 150 workshop sessions and a schedule of events that runs to more than 80 pages.   Donations to the conference organisation alone amounted to over $65,000.   So it’s big – very big. As it would be for an organization that has over 700 chapters and hundreds of thousands of members.

But (did you sense a ‘but’ coming?) – the conference is being held in a family resort in the heart of Florida’s tourist industry and surrounded by all the attractions that Disney World has to offer.  So as we walk to the auditorium or take lifts to our rooms we share corridors and passageways with mums and dads with their children all of which are very much alive and well … sons and daughters dripping with swim wear and decked out in Mickey Mouse merchandise.

The Compassionate Friends are a peer to peer support network – bereaved families connecting with other bereaved families in the knowledge that there’s a shared as well as discrete understanding of what it means that a child of yours should die before you do. In the UK at least, TCF is predicated on the idea that when we get together, bereaved parents need a special place to express their feelings away from the glare (and possibly the judgement) of that other world of the non-bereaved – a kind of bubble if you like where for a time we can drop the mask and just be ourselves.

In Orlando there was no such shelter. This gathering even shared the facility with other (just as huge) conferences – ours were blue and yellow badges, distinct from the rose coloured ones of delegates for what I first understood were the Pink Vagrants.   No – not a charity for homeless gays but a beauty product convention – Pink Fragance!

To a certain extent though I found myself enjoying this radically different approach – maybe that’s because its now six years since Josh died and I am by now more secure in my own feelings. I am now stronger in my acceptance of his death and I am stronger as I express my grief in public, whether that be tears that he is longer alive or laughter for our shared memories.   I found myself totally unfazed talking quite openly with another bereaved dad while kids splashed around in resorts ‘lazy river’.

What was more surprising about this lack of intimacy was that even parents for whom this was a first time occasion, for parents who were so recently bereaved, this conference allowed for a display of grief that was as heartfelt as it was spontaneous.   To be sure there was a certain evangelical if not charismatic tone to the proceedings, but just as here in the UK, there was much comfort to be found in the meeting of friends new and old.

250 seats were laid out in the space scheduled for the screening of A LOVE THAT NEVER DIES on the Friday evening.   Ten minutes after it was due to start people were still pouring in and while more chairs were brought, it was standing room only for a show that was truly exciting to be part of. Needless to say the film went down very well and we seemed to gain a certain ‘celebratory’ status as following the screening people lined up for ‘selfies’ with us.  Of course our story is only one of many.  We are proud to have had the opportunity to give a voice to grief that can resonate for others, but we will always think of grief as a great leveller, there is no hierarchy in grief, and that celebrity really has no place as we try to overcome the trauma of our loss.

Everybody grieves differently – whether that’s in private or in public.   But while TCF had organized a conference for grievers, for me it wasn’t a space for grieving. Unlike others, it wasn’t a space to which I could bring my dead son.   If I’m going to join with others in the same boat as us, then I think I prefer a quieter more informal gathering.   But that’s just me and my very British way of doing things.

Great film… beautifully shot, profoundly authentic and raw. No platitudes or sugar-coating, but also filled with hope and meaning and connection.  (Jennifer Dixon)

Totally amazed at the quality of this film and how you captured the unfiltered emotions of bereaved parents. This is the best film I have seen as an example of what a non bereaved person needs to understand. Thanks for getting across what our world is really like  (Steve – Kelsey’s dad)

It’s only 4 months that I have been bereaved so I was scared to watch the movie. But I did. I cried and the subjects spoke about the agony of loss. I am so glad I stayed and watched it. It helped.    (Ellen)

And some of my photos from the weekend