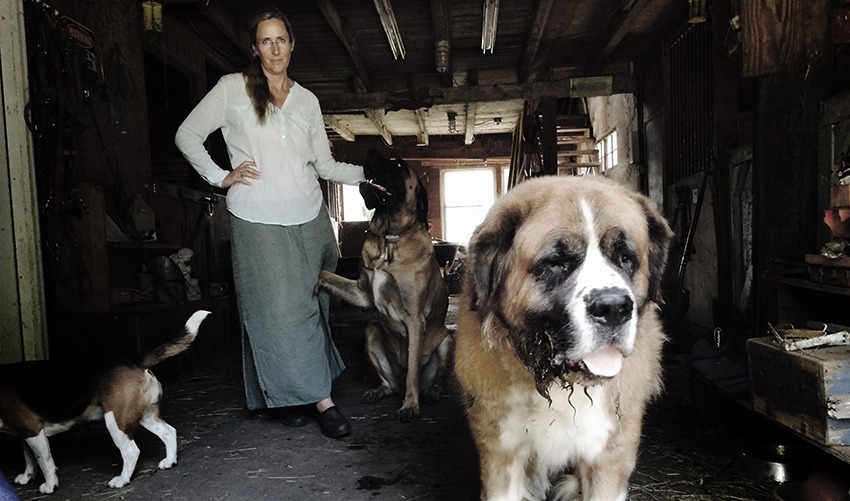 This is Scarlett Lewis, she lives in Connecticut a two hour drive from Brooklyn where we are based for the first week of our journey.  Scarlett is a single mum.   She has two horses, four dogs, a whole load of chickens and two children JT (Joseph Thomas) who is 15 and Jesse who was 6 when he was shot and killed in a mass shooting at his school, the Sandy Hook Elementary on 14th December 2012.

Scarlett has endured not just the death of her son in the most horrific of circumstances, but the attention of the world’s media as tv crews and journalists descended on her home town in droves.   Sandy Hook, like Columbine and Virginia Tech before it, became a by word for the pain that America can inflict on itself and a catalyst for a seemingly endless debate over gun control.     20 children and 8 adults (including the shooter and his mother) died that day and the trauma of the event was felt across the whole country.   How then does one grieve when all the world and his auntie are looking on?   How then do you find solace and support from your own friends and family when they too are subject to the very public pressures of being a victim from Sandy Hook.  Where do you begin to create a new sense of self, …. when your boys smiling face has been splashed across front pages around the world.

Scarlett was on the phone when we arrived.    Still talking she showed us to our room and went back to work at her computer, one of many conference calls she makes every week soliciting support, and managing the charity she has created – the Jesse Lewis Choose Love Foundation.

Over the next three days we would get to know this remarkable woman in ways we could not have anticipated.

In starting the foundation, Scarlett is promoting her young son’s message to the world.   A few days before the tragedy Jesse had scrawled these three words on the kitchen chalk board – ‘nurturing, healing,  love’  – remember these are the words of a seven year old; which means he was either brought up in a hugely caring environment or that he already had remarkable insights, intelligence and compassion .. or both.   In any case young Jesse is known locally as one of the heroes of Sandy Hook – while the shooter Adam Lanza, was reloading his magazine, Jesse took the opportunity to urge his classmates to flee the scene.   Nine ran to safety but Jesse paid the price.

We asked Scarlett if she felt anger towards the shooter.   “Forgiving is not forgetting” she said ”it doesn’t mean I don’t get angry but I knew I had to forgive to survive in order to move forward otherwise I would have been ruled and destroyed by anger.”

Adam Lanza was a victim himself, Scarlett claims,  a victim of his environment and that he should not be dehumanised as mass murderers so often are: that is a way of  avoiding the responsibility we all share for the social conditions into he grew up.   He was not born bad!

We talked about early attachment models and how fundamental they are to the way we relate to each other in later life.   The prime objective of the Jesse Lewis Choose Love Foundation is to get educational programs known as ‘social and emotional learning’ mandatory in all schools.  If Lanza had received help support  and encouragment much earlier in his life, if he had learnt how to recognise his emotions and the affect they have on others  her son and all the other children of Sandy Hook might still be alive today.

What is good grief?   We want to ask all our contributors what they think is ‘good grief’.  For Scarlett it is embracing the trauma of her son’s death and using it as something she can grow from.      Scarletts passion for her project is boundless. And its easy to understand why. She is a doer. a dynamic (if a bit chaotic) business woman, and an eloquent and forceful exponent for her ideas.  She is also a bereaved mum and one of the many remarkable and inspirational people that we hope to meet on our travels across the USA.

Thank you Scarlett Lewis for letting us into your life, for telling us your story, and for sharing your vision of a more compassionate world.

And thank you dear reader for listening.

Links:  The Jesse Lewis Choose Love FoundationFor a few photos from our stay with Scarlett click on  photo storiesFor a general overview of THE GOOD GRIEF PROJECT  see the ABOUT section of this blog

or go to THE GOOD GRIEF PROJECT | BEYOND GOODBYE