Portal to images of Emily in her casket 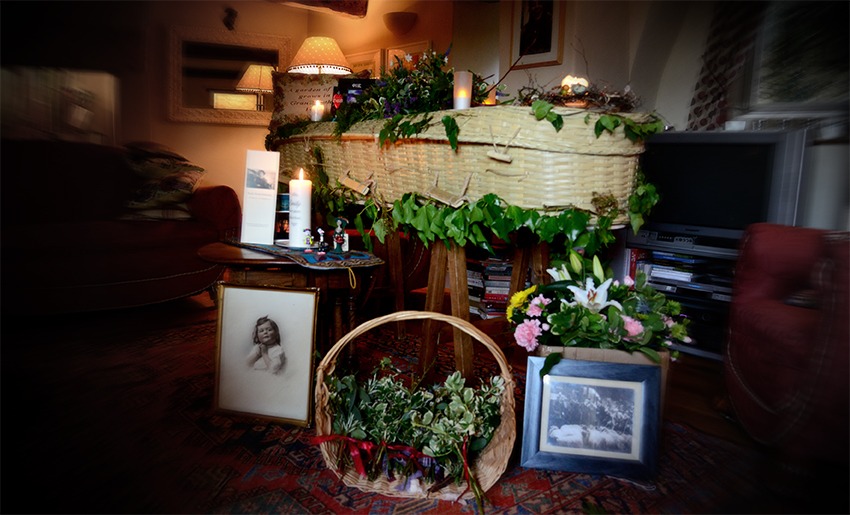 Nearly there – but first a few words

After the celebration of her life we brought her back home to spend the night in our living room – not an unusual thing to do but within my family it was seen as contentious.  We had also decided not to have an open coffin for her funeral – again something that id days past would have been quite normal – but the reason we did so was to spare the feelings (let us fears) of just a few family members who wanted their memory of our Mum to remain unadulterated by a photograph of her in  death.   And while I respect this wish to remember Emily in which ever way they want, I do disagree with the sentiment behind their choice not to view her body in death.

A brief explanation from my own experience – in 1971 I was involved in a terrible car accident in which my girlfriend of the time was killed.  She had drowned after the car we were travelling in the then Yugoslavia plummeted into a fast flowing river.   I never saw Gillian again and her body wasn’t recovered until two weeks later and would have been unrecognisable.   When another friend Bob died in an airplane crash in 1982 his body was returned to his home town in Yorkshire, where again I was advised that: “you don’t want to see him – he’s such a mess, burnt almost beyond recognition”.   Friends might have been right but the result of not viewing their bodies was that it took me that much longer to come to terms with the fact of their deaths.  I would even have strange fantasies that they were not really dead but just avoiding me – I would see a woman on the other side of the street and think it was Gillian, or I would hear Bob’s voice (or someone who sounded much like him) in a crowd – all of which would unsettle whatever certainty I still had about their (and my) mortality.

A dead body is not frightening.  Death itself may be, and we are entitled to a fear of death (it’s largely what keeps us alive) but a body that is already dead is not something we should be afraid of especially if in the normal course of events it has like my mother’s not become disfigured.   In viewing my mother’s body, Josh’s, my fathers (27 years ago) I had many very strong emotions, a deep deep sadness and a longing for things as they were, a gut wrenching sense of loss, and in Josh’s case a crazy sense that I was not really experiencing anything, a sort of truly confused sense not knowing anything at all  – but fear was something that I did not feel.  Maybe I can say this because I now have considerable experience of viewing the dead (and I know for certain that they do not bite!) the first time when my next-door neighbour invited me round to see her husband who had died the week before.  “Doesn’t he look nice” she whispered taking me by the arm and leading me to the coffin in her front room, “they’ve made him up really well haven’t they”.   Her need to share and my own curiosity combined to make this encounter with death a truly significant first step in my own understanding of of how I could be in its company.

That would have been nearly forty years ago and I remember the moment with much fondness and gratitude.  In hindsight and with Josh’s and Emily’s death still very much a presence in our lives, I think I can safely assert two things:  my memories of my mother and of Josh are not in anyway tainted or undermined by my having viewed their bodies in death:  and that our fears about seeing our loved ones in death have far more to do with anxieties we might have about our own mortality and whatever emotions that may provoke, than they do about their actual deadness.

To me it is quite odd that I should hide pictures of my mother in death  behind a curtain but I do this  to respect for those who wouldn’t want to come across them by chance ….

Emily in her casket continue by clicking here

but only if you are sure